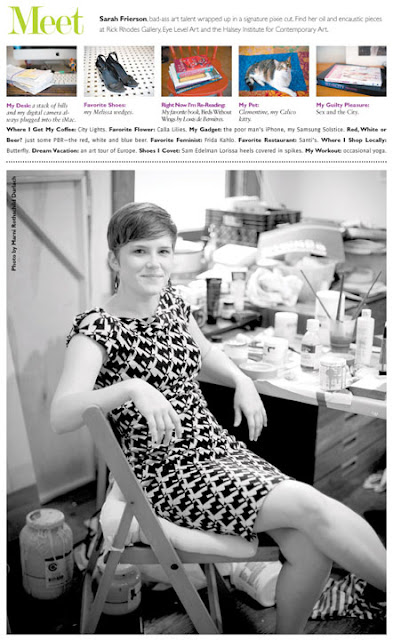 Lately, I have been struck by these beautiful large-scale paintings by Peter Opheim. The color and quality of the work is amazing! They are really inspiring the direction of some new work for me. 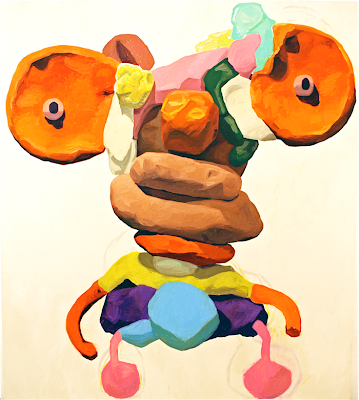 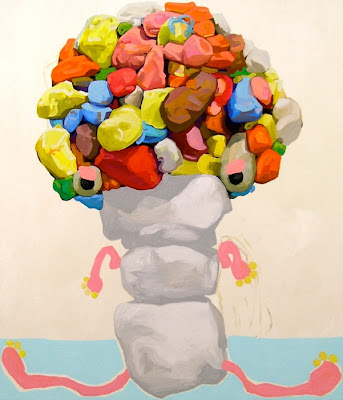 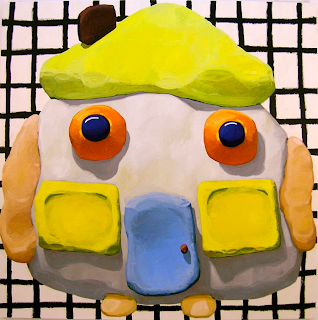 Peter Opheim, “Untitled”, 96” by 96”, oil/canvas, 2011 (#135)
To see more of his work, visit his website, www.peteropheim.com or check out a studio visit with the artist from New American Paintings blog: nice images that show the surface quality of Opheim's work.
at 4:53 PM 0 comments

Next Show to Open this Friday!! 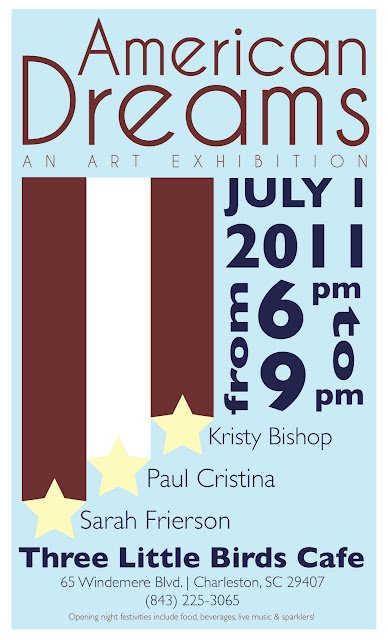 The artwork featured in American Dreams will be a personal exploration of what it means to be an American today.
Kristy Bishop, local mixed media artist, uses fabric, paint, sewing, yarn, and many other fiber mediums to create her artwork. Her past work has been inspired by the negative effects of human-induced changes and encounters with the natural environment.  For American Dreams, she is creating new work that examines the illusion of classlessness in America. She is interested in the idea of purpose and belonging in a consumer culture and the unprecedented widening gap in the distribution of wealth in America.
Sarah Frierson holds a BFA in Painting from the University of South Carolina.  Now a Charleston resident, Frierson works in a variety of painting mediums including oil and encaustic, showing her work at Rick Rhodes Gallery, Eye Level Art, and the Halsey Institute of Contemporary Art.  Her work explores what “home” is in America today, focusing on movements of populations and the foreclosure problem in the U.S.
Paul Cristina is originally from Cleveland, OH and currently resides in Charleston, SC. He creates works of art in a variety of mediums including pen, ink, acrylic, watercolor, solvent transfers, digital collage, and mixed media. His work has been featured at Kulture Klash, The Meeting Space, and Jimbo’s Rock Lounge.  Through his work, Cristina investigates how our society is affected by the relentless exposure to excessive snippets of filtered, diluted and falsified information being fed to us through various media outlets, and how it strategically shapes our minds, influences our thinking, and progressively deteriorates our attention spans.
The art show will be a pre-4th of July celebration with refreshments provided by Three Little Birds Café and Catering and live music on the patio.  The party is free and open to the public. Complimentary sparklers will be provided!
at 4:09 PM 0 comments

The Evolution of a Painting

This is a piece I finished back in January of this year for the Material World show.  With my lovely new digital camera (moving into the 21st century, I am!), I documented the steps of the painting--basically each photo is a stopping point I reached to allow the painting to dry before adding the next 'layer.'  Just thought it was interesting to see where it starts and how it ends. 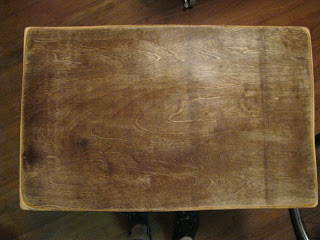 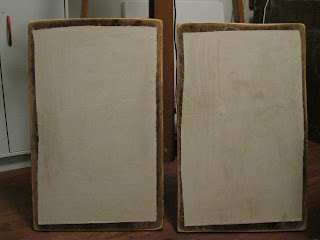 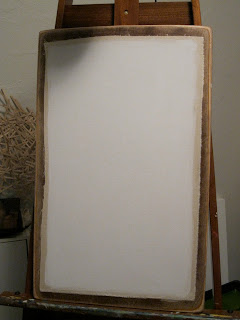 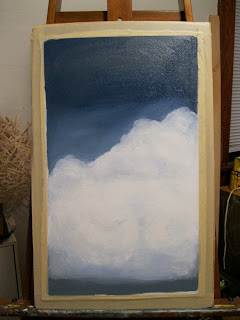 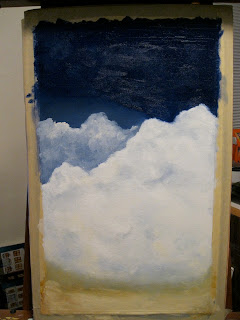 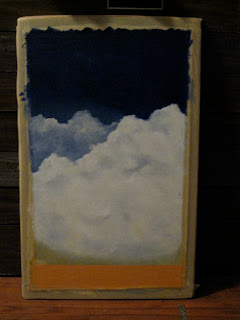 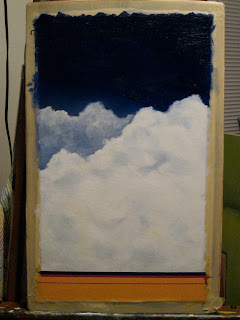 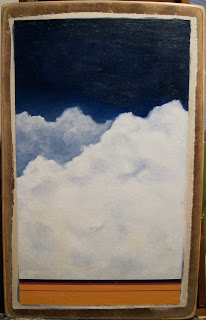 Capturing the progression of the work was an idea I got from the website of another painter I recently discovered, Alex Kanevsky. You can view his process here (it's absolutely amazing!).  The photos were taken in my studio on different days and different times of the day, thus the changes in lighting.  There is also a companion piece to this painting, or shall I say, the second in a series I am working on... 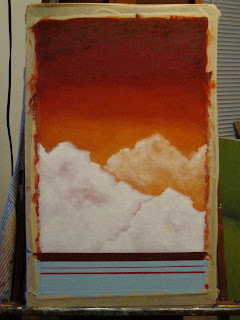 Both pieces are for sale. Contact me for prices and availability.
at 8:43 PM 0 comments 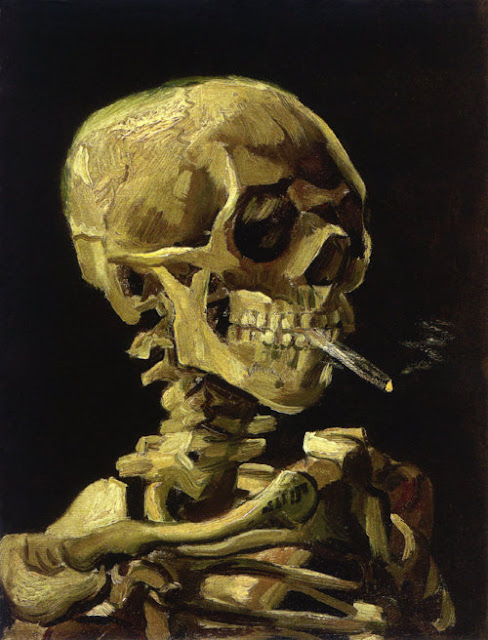 I hate to say it but.... smoking just looks cool.

Material World
Works by: Kristy Bishop, Sarah Frierson, Nina Garner, and Hirona Matsuda
Friday, January 28th from 5:30-7:30 pm
@ The Flagship, 475 East Bay St. (the old Hollywood Video, I'm told)
I've gotten a little slack on the Art Basel coverage lately. The reason behind my slackness is that I've been working on some new pieces for this show, which you should all attend. It's kind of a one night showing so please come see it!

It's totally free and open to the public. Delicious food and wine will be provided by Social. There'll be beautiful work from all four artists! Check out Kristy Bishop and Nina Garner now!
at 1:20 AM 0 comments

My trip to Miami had several motives. My main goal was to see the art, of course, but I am also lucky enough to work for an artist who was showing in Miami. My boss, Benjamin Hollingsworth, was showing several pieces in a show entitled Voyeur at a new luxury condominium on the corner of Collins and 21st Street. So on Friday morning Kristy Bishop and I headed down to Miami Beach to help hang the show.

Luckily the opening later that night was awesome! Benjamin, Kristy, and I were a little worried after spending the afternoon just asking for bad luck—as a part of Ben’s installation, we broke mirrors and walked under ladders all afternoon! Whew! Here’s a few shots from the installation and the opening (sorry, the light’s not so great): 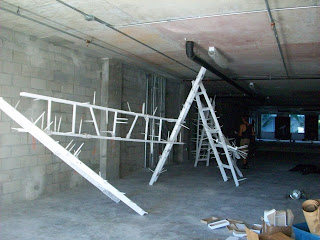 The before shot: installation 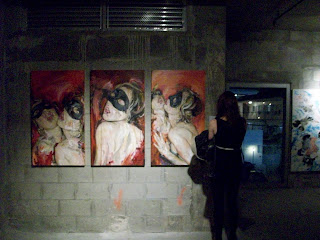 Other works at Voyeur; triptych by Ben Olson 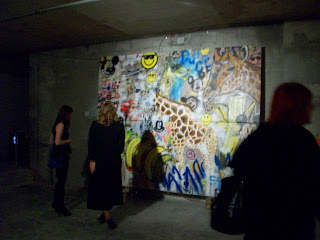 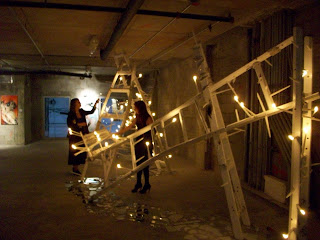 The after shot: Kristy and Shelley lighting the candles at the opening 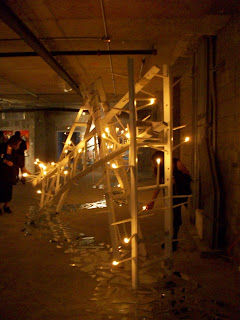 And I was happy to see there were other artists representing for Charleston! In addition to about 10-15 artists I spotted from Charleston in Miami, I knew that Scott Debus, another Charleston artist, was out there somewhere with a moving truck full of work, but we hadn’t found him yet. One night, while walking through the Design District of Miami, we stumbled upon Scott, putting his work out there on the busy streets. Scott had rented this huge moving truck and turned it into a mobile gallery. The shear spectacle was drawing in a huge crowd, with Scott’s paintings on wood creating a mural alongside the truck and a small entryway at the top of the truck’s ramp. It was like going into a fun house, and the inside was even complete with Scott’s fun house mirrors! He was selling a lot of work and had a line to get in. I call it a success! And even though Scott mentioned he had been there almost 24/7 all week and was maybe a little exhausted, I could tell by the smile on his face that he was having a great time too. All in all, it was a great vibe for viewing work. I talked to Scott recently about his experience and he suggests we all (Charleston folks) pack up our moving trucks and take over an entire parking lot in Miami next year. The mobile gallery is on—maybe we can make it an entire mobile art fair…who’s in?! 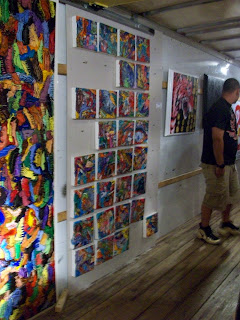 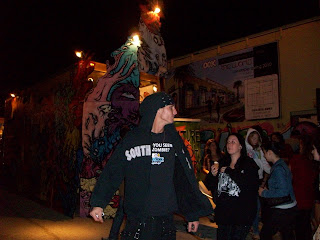 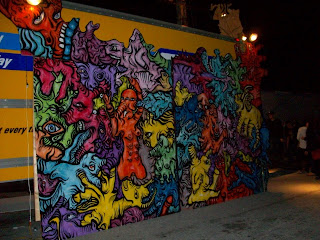